What She Said: The Art of Pauline Kael

Atomic: Living in Dread and Promise

The Beast In The Jungle 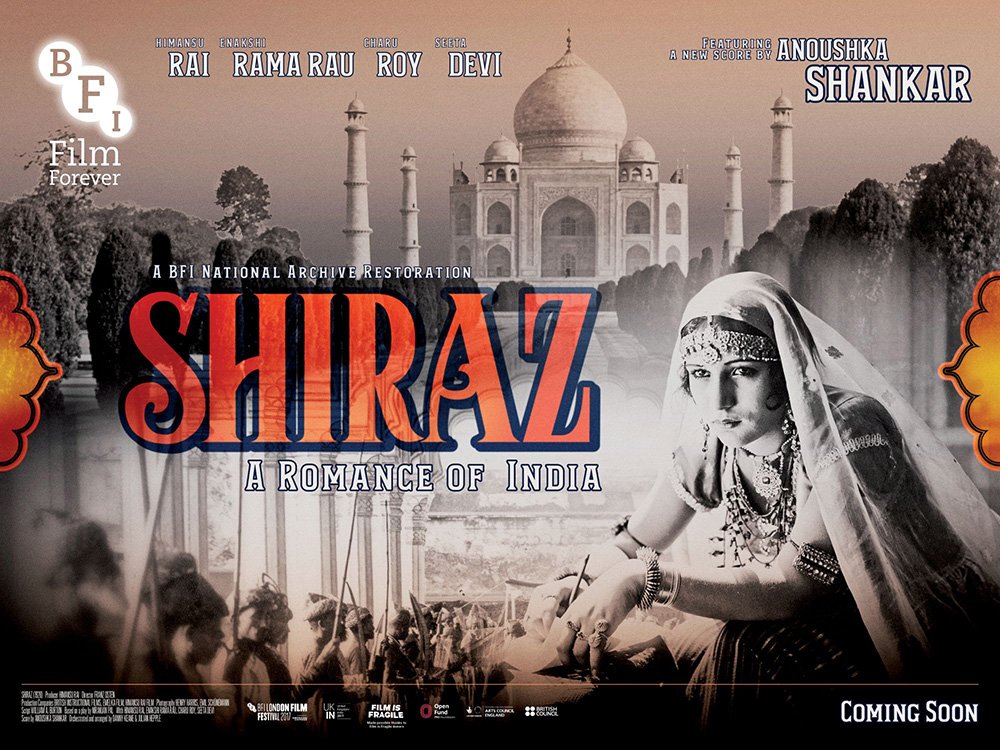 Juno Films has licensed the exclusive North American rights to the British Film Institute(BFI)’s 2K restoration of director Franz Osten’s epic black and white drama, Shiraz: A Romance of India. Based on the romance between 17th-century Mughal ruler Shah Jahan and his queen, this epic silent film is the ravishing, romantic tale behind the creation of one of the world’s most iconic structures: the Taj Mahal.

Shot entirely on location in India, it features lavish costumes and gorgeous settings – all the more impressive in this meticulous new digital restoration by the conservation team at the BFI National Archive which features a specially commissioned score by the Grammy Award-winning Anoushka Shankar. Produced by and starring Indian film legend Himansu Rai, the film is performed by an all-Indian cast, featuring Rai as humble potter Shiraz, who follows his childhood sweetheart Selima (Enakshi Rama Rau) when she’s sold by slave traders to the future emperor (Charu Roy).

The film will premiere in the US at the Metrograph Theater in January 2019 with a DVD and BluRay release to follow in May on the new Juno Selects home video label distributed in partnership with MVD. Additional home video titles to be released on the new label include Peter Sellers’ debut feature film, Pennies from Heaven and his short film, Let’s Go Crazy.

The deal was negotiated between Elizabeth Sheldon, Juno’s CEO and co-founder, and the BFI’s Violette Martin. “It is an honor to work with the BFI on the release of Shiraz: A Romance of India. It is a timeless tale of devotion that left humankind with a monument to the inspiration and power of true love, the Taj Majal,” says Sheldon, “and the new score by the Grammy-award winning Anoushka Shankar seals it as a contemporary masterpiece.”

“The restoration of SHIRAZ was the culmination of thousands of hours of painstaking conservation work by the BFI National Archive to transform this silent classic, thereby ensuring its safe preservation for future generations. The BFI therefore is very happy to see SHIRAZ in the highly skilled hands of Juno Films and Elizabeth Sheldon for its North American distribution, as well as to have the Metrograph Theater on board for the opening week in New York. We look forward to further collaborations with Juno Films around our classic film collection.” commented the BFI’s Violette Martin.

ABOUT THE BFI NATIONAL ARCHIVE

The BFI National Archive was founded in 1935 and has grown to become the one of the largest and most important collections of film and television in the world with over 180,000 films and 750,000 television programs. For over 80 years the BFI has been an international leader in film preservation and guardian of Britain’s unparalleled film and TV heritage. The BFI is an innovator in presenting films to audiences in new and dynamic ways, from cinemas to film festivals, outdoor events to online video-on-demand. At the heart of all its activities is the BFI’s central aim to ensure that everyone in the UK has access to the widest possible range of film and their own film heritage.

That heritage includes all time great British directors Alfred Hitchcock, David Lean and Powell and Pressburger; and the rich vein of documentary filmmaking, in which Britain led the world, including the lyrical work of Humphrey Jennings. The archive also boasts a significant collection of filmmakers’ papers as well as extensive stills, posters and production and costume designs along with original scripts, press books and related ephemera.

Expert teams undertake the time-consuming and complex task of restoring films at the BFI John Paul Getty Jr Conservation Centre in Hertfordshire. The BFI’s most precious film materials are kept in optimum conditions in the world-leading Master Film Store in Warwickshire. 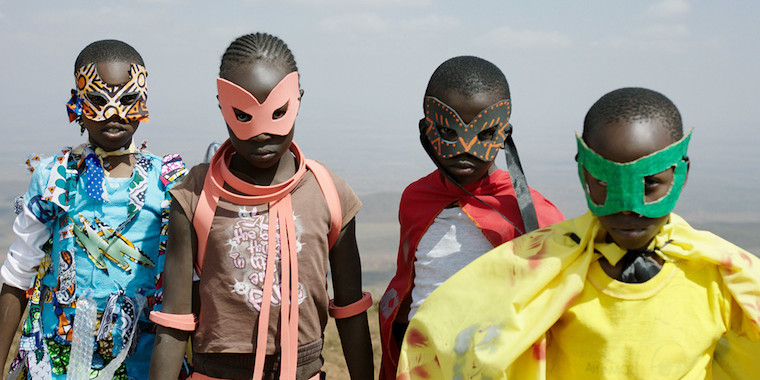 Likarion Wainaina’s “Supa Modo,” about a mother determined to bring joy to her dying daughter’s last days, is Kenya’s submission for the foreign-language Oscar race. The film, which world premiered in the Berlinale’s Generation Kplus program last February, was selected by the Kenya Film Commission on Friday.

Produced by Tom Tykwer’s Kenyan shingle, One Fine Day Films, and Kenya’s Ginger Ink, “Supa Modo” is the uplifting tale of a terminally ill girl whose village comes together to fulfill her dreams of becoming a superhero, convincing her she has special powers and casting her as the star of her very own movie. The film, which stars veteran actors Maryanne Nungo and Nyawara Ndambia alongside newcomer Stycie Waweru, earned a Children’s Jury Special Mention in Berlin.

CIELO opens at Laemmle Ahrya this Friday with a Q&A hosted by Marja Seidel and Johanna Teske on Saturday evening. Learn more here.

On the 23rd CIELO opens at CCA in Santa Fe.

And it is held over until August 29th at Film Forum.

CONSTRUCTING ALBERT has its Chicago premier at the Gene SIskel Film Center:

"A fascinating window on the challenges of meeting often rarefied expectations within haute cuisine circles…will satisfy the appetites of both the curious and the food-focused alike." - Justin Lowe, Hollywood Reporter

The much-honored Spanish restaurant elBulli, which closed in 2011, was once considered the best in the world, but this intriguing foodie documentary reveals a rival - a sibling rival, that is. While elBulli's head chef Ferran Adriá was proclaimed a genius, it seems that behind the scenes simmering wasn't confined to stockpots. Over a four-year period, filmmakers Collado and Loomis follow the story of Ferran's former partner and co-chef, younger brother Albert, as he steps out of the long shadow of elBulli's legacy and stakes his own claim to fame on an ambitious string of five restaurants in Barcelona's theater district, each featuring a different wildly innovative cuisine. Mouths will water as the film details the creation of Enigma, the seriously experimental eatery that Albert hopes will seal his place in gastronomic history. In Spanish with English subtitles.

If you are in NYC August 15th - 21st, go to the newly renovated Film Forum to see Alison McAlpine's starry meditation on the night sky. As described by American Cinematographer,

The documentary Cielo is a visual tone poem about humankind’s relationship with the night sky, a philosophical exploration of the heavens above the Andes Mountains and the Atacama Desert in northern Chile. Written, directed and produced by Alison McAlpine, and shot by Benjamín Echazarreta, this contemplative and richly visualized astronomy doc combines incredible landscapes with celestial perspectives that encourage the audience to ponder its place amid the grand shrine of the cosmos.

Over the course of the movie, the filmmakers meet and spend time with professional astronomers and local residents, giving equal weight to the observations and musings of each. The masterful use of time-lapse photography, a painterly application of natural light, a deft use of in-camera “organic” effects, and an extraordinary sense of composition produce imagery that is truly mesmerizing.

Fire and Ashes, Making the Ballet Raku will have its' NYC premier July 21st at Lincoln Film Society's Dance on Camera festival followed by a Q&A with director Shirley Sun.

Set in historic Kyoto, the fictional story of RAkU is based on a true event, the burning of a sacred temple by a deranged monk. Yuri Possokhov’s choreography for prima ballerina Yuan Yuan Tan mingles Japanese Noh theater and elements of Butoh with classical and contemporary ballet styles to create a powerful dance drama. The film begins with Russian-born Possokhov and his team making plans over vodka and borscht, then moves into an intense rehearsal process, and culminates in a breathtaking performance by Yuan Yuan and her male partners—Damian Smith and Pascal Molat—as they enact this passionate tale of love and revenge.

If you are in Los Angeles, go see the documentary about Albert Adria that The New York Times described as "...a chef's ambition, meticulously plated."

Albert Adrià has all the ingredients of a creative genius. Playing a key role in the creation of elBulli, the greatest restaurant in history, wasn't enough. Escaping the shadow of his famous brother Ferran, Albert is seeking his own success.

Adrià was named one of the most influencial people in the world of food by TIME Magazine.

“An audacious plan to independently establish five new restaurants in Barcelona within the space of a year…Constructing Albert represents both an insightful documentation of that process as well as a fascinating window on the challenges of meeting often rarefied expectations within haute cuisine circles; it will satisfy the appetites of both the curious and food-focused alike.”

If you are in NYC tonight and want to catch a film and enjoy some epicurean delights afterwards, go to Film Society  Lincoln Center to see Constructing Albert.

Enjoy food and drinks by:

The legendary restaurant elBulli was sparked from the minds of Ferran and Albert Adrià, two brothers from a poor suburb of Barcelona. Ferran is the name most people know; younger brother Albert, who had reluctantly started working with his brother at age 15, with no culinary aspirations, has long remained in Ferran’s shadow. He is now considered by many to be the most underrated chef in the world. This new documentary focuses on this self-proclaimed outsider in the midst of a hugely ambitious creative adventure: to build a gastronomic empire in a crumbling theater district in Barcelona. (Directed by Laura Collado and Jim Loomis, 82 min).

Juno Films is headed to Toronto for Hot Docs with four films: The Silk and the Flame, Cielo, The Last Refugees, and Constructing Albert.

CIELO is like SAMSARA meets PARTICLE FEVER…  CIELO  is a cinematic reverie on the crazy beauty of the night sky, as experienced in the Atacama Desert, Chile, one of the best places on our planet to explore and contemplate its splendor. Director Alison McAlpine’s sublime nonfiction film drifts between science and spirituality, the arid land, desert shores and lush galaxies, expanding the limits of our earthling imaginations. Planet Hunters in the Atacama's astronomical observatories and the desert dwellers who work the land and sea share their evocative visions of the stars and planets, their mythic stories and existential queries with remarkable openness and a contagious sense of wonder. A love poem for the night sky, Cielo transports us to a space, quiet and calm, within which we can ponder the infinite and unknown.

The fate of refugees to the US has been the subject of media headlines since Trump's inauguration and the implementation of his highly contested travel ban. This cinema vérité style documentary follows the Kalajis—originally from the besieged city of Aleppo —allowing for a peek into the lives of those who seek a new life in America. The viewer becomes immersed in this family’s journey as they travel from Jordan to their new home of Philadelphia. As the popularity of the New York Times’ “Welcome to the New World” comic proves, Americans long to understand the plight of refugees in a deeper way than bombastic media commentary allows.

Upon their arrival in January 2017, they seem lucky: They are among the last refugees to make it into the United States before Trump’s travel ban is implemented. But their private victory over public policy is bittersweet, as their eldest daughter, Ju-Ju, is pregnant and has been left behind. When they realize they have only three months of financial aid from a refugee resettlement organization before they must be financially self-sufficient, another harsh reality sets in: They could be displaced and dispossessed all over again.

In the world of haute cuisine, the name Adrià is synonymous with creativity. Constructing Albert is a portrait of the younger brother Albert as he strives to establish his own reputation in the world of international haute cuisine after elBulli.

Nobody in the world makes restaurants like Albert Adrià” -- EATER

Albert has had the misfortune of being my brother. I really think he is the best chef I’ve ever known” -- FERRAN ADRIÀ

Announcements
Constructing Albert Heads to SXSW in Best of Fest

It's official: Constructing Albert will be at SXSW in the Best of Fest section. Congrats to Laura, Jim and Mariann.